I’ve been building models all my life. Maybe it has something to do with the fact that my Dad opened a hobby shop in 1966, when I was 6 years old. I grew up with plastic kits, R/C planes and boats, slot cars, model rockets and every hobby you can name all around me.

My love has always been building plastic kits and scratch builds. I haven’t built a kit straight out of the box since I started going to IPMS meetings when I was about 10. I saw the amazing things the other members were building and thought “I can do that”. They were mostly grizzled old cigar-chewing heavy drinking veterans. I soon was building kits like the 1/24 scale Matchbox Spitfire and Me-109, detailing, painting and finishing so they looked real to me. And to the veterans.

Another interest that’s been with me since the mid-sixties is Science Fiction. A Trekker from the time my parents wouldn’t let me watch it, I was enthralled by the stories, characters, sets and ships. But mostly the sets and the ships.

While a Theatre/Media Arts major in the Theatre Department at The University at Buffalo, I worked on a great number of on- and off-campus productions designing and building sets and props, designing and running lighting in the Katharine Cornell Theatre, sound, and even a bit of acting. One highlight was building, repairing and duplicating period furniture for a Samuel Beckett play, a premiere work by the renowned playwright.

In the 1980’s I had the opportunity to turn my passion into a job. I was hired to build architectural subjects at Carolina Architectural Models in Raleigh, NC, which then became Scale Model and Design Studios. My interview consisted of showing owner Dudley Whitney a Porsche Can-Am car diorama I had built. The engine, brakes and interior were fully tricked out, accurate to the last detail. He hired me on the spot.

Some years later, I worked with Mike Satrazemis (not that one, that one’s dad) at Tri-Star Design Group. Tri-Star built anything and everything. While there, I did plastics fabrication and design, building some of the most challenging subjects of my career. This led to some overseas work and work on two films – King Kong Lives and The Squeeze.

For King Kong Lives (most notable for having a 0% rating on Rotten Tomatoes), I worked with a crew building a scale barn that King Kong crushed while getting busy with Ms. Kong, and some of the operating room equipment used in the scene where Kong gets the Jarvik 7000 artificial heart transplant.

On The Squeeze, our crew built a staircase and other large pieces for the nightclub set, all made in clear Acrylic. For the staircase, I designed and executed a forced-perspective paint treatment that allowed the interior lighting to shine through, and gave the on-camera appearance of something much larger than the set was in reality. 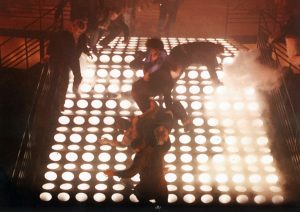 Nightclub staircase from ‘The Squeeze’. Made from 3/4″ clear acrylic sheet. With forced-perspective paint application. 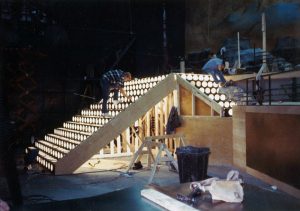 Nightclub staircase from ‘The Squeeze’. That’s an old friend, John Goodson touching up the paint. 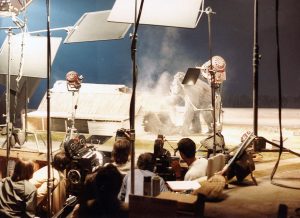 How the barn model gets destroyed. 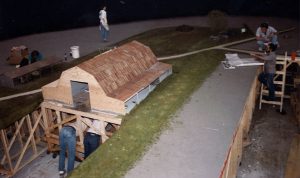 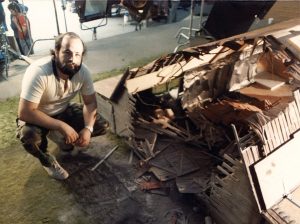 Another highlight of working with Tri-Star was doing pre-production artwork for a little picture that was about to start filming soon – The Abyss. Sadly, none of my sketches and prototypes made it into the picture, but I have the memories.